No Comments on Five Pirates Slot Game ReviewPosted in Slot Game By McNicholasPosted on October 17, 2020November 3, 2020

The online slot games are growing on a daily basis, with a new game launched by a known developer every now and then. One of the recent introductions to the slot machine genre is the Five Pirates slot game, which offers engaging gameplay for serious players. It has an exciting storyline and a reckless pirate ship theme to give players a classic pirate experience. This is a journey to unlock the hidden treasures buried in the sea while you like the life of a pirate in an engaging plot.

Five Pirate is a classic slot game made exclusively for online gaming by NYX Gaming. The game released in June 2017 and became a widely popular choice for gamers around the world. NYX Gaming is known to create some high-quality retro-themed games, and this game is a worthy example based on its graphics and storyline. Apart from the theme, the game offers enough free spins and multipliers to keep players engaged for hours. 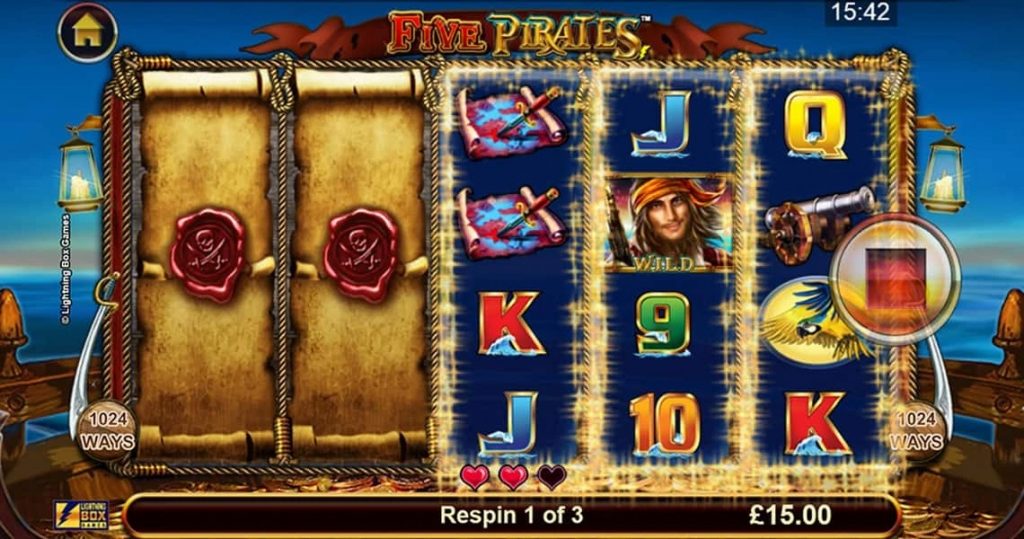 How to Play Five Pirates

You can play in the range of 0.50 to 350 credits per spin in this retro-themed pirate slot game. You can change the bet size using the up and down arrows in the game. The play button will trigger the reels. There is also an auto-play button that can activate 100 automatic spins without any requirement for action. You can find the game for desktop and mobile downloads with high compatibility. The RTP for the machine can go up to 95.49%, which is a great RTP for a slot machine that offers a good plot.

The game has the retro style pirate-themed graphics. It is built around a ship that has found the lost treasures of the sea. The graphics quality is a bit cartoonish, but it justified the overall theme of the game. As a player, you sail across seven seas with a reckless crew to find your enemies and take away their treasures. Five Pirates is a five-reel, four-rows slot game that offers 1024 ways to win the game. The reels have symbols such as treasure maps, parrots, treasure chests, cannons, and also playing cards like A, K, Q, until 9. The wild symbol is a bearded pirate who can only appear in 2 and 4. It substitutes all other symbols to make a combo, except for the pirate wench scatter. The pirate wench scatter the highest paying symbol, which can give up to 200,000 credits if it appears on all the five reels. The five canons and parrots provide a multiplier of 750x, while the treasure chest will reward you with 1,250 credits. There are also several bonuses in the game, along with a hold and spin feature and pirate barrel bonus.

Overall, the five pirates is an entertaining game that you can try out if you are a fan of pirate movies and books. The game stands along with the likes of Ghost Pirates, Shipwreck, and Pirates’ Booty to be the most played games in the genre.